The Federal Court of Canada made a decision in the CIRA lawsuit today, ruling that internet service providers were under no obligation to hand over the identities of file-swappers based on their IP addresses.

A few interesting notes: First, although most ISPs are defending the privacy of their users (and, if you'd like to be cynical, protecting the one reason for the explosive growth of high-speed internet sales), Quebec-based Videotron did not object to the order to turn over its users' information.

Secondly, the logic behind the judge's refusal seems particularly fuzzy:

"The mere fact of placing a copy on a shared directory in a computer where that copy can be accessed via a P2P service does not amount to distribution ... Before it constitutes distribution, there must be a positive act by the owner of the shared directory, such as sending out the copies or advertising that they are available for copying."

I'm thrilled that I'm not going to be narced out by my ISP (well, perhaps I will.. damnable Videotron!), but how is installing a file-sharing application and saving music into a shared folder not a positive act? I cannot imagine that those targeted by the lawsuit, having collections of thousands of MP3s, are so computer-illiterate as to not know they were actively sharing the files they downloaded.

Oh well, loopy logic or not, hats off to Judge Konrad von Finckenstein!


I created the world's biggest scene today at Pizza Dore at the Berri-Uqam station. I sat down with my mushroom slice and Diet Pepsi, whereupon the can of Diet Pepsi fell off the tray and spun around in a circle, discharging its contents all over the three adjoining tables and their occupants. Mortified, I stammered a profoundly embarrased apology in my broken French as my fellow pizza-eaters squinted and wiped Pepsi off their faces and blotted their backpacks and coats with napkins.

Worse still, I hadn't taken the slices to go, so I was basically forced to eat my pizza at the table, in the company of the people I had just sprayed with soda.

I believe I will now curl into a small ball and die of embarassment.

McGill had been pursuing the possibility of establishing a food-services monopoly on campus, similar to the one in place with SoDexHo-Marriott at Queen's. Chartwell's cellophane-wrapped pitas and overpriced, lilliputian salads would become the only game in town, as I understand it.

So, some McGill rabble-rousers, god bless their hearts, stirred some shit up and submitted an enormous petition to the administration expressing student trepidation about the proposed monopolization. With an "integrated food services plan" in place, Chartwell's would crowd out the PGSS' Thompson House operations and kill the super-rad, indie-run Architecture Cafe.

So, McGill finally sobered up today and capitulated to the students. The bidding process will be delayed for a year, and an advisory committee will be striken to solicit student input. 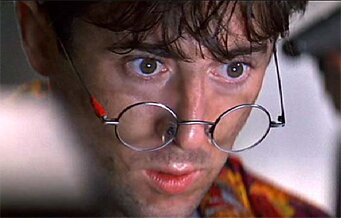 The Russians, nostalgic for their days where their military might (rather than just their loose nukes) made them a threat to be reckoned with, announced this week that a "revolutionary" weapon had been developed that would render the US missile shield utterly useless (versus being only 90% useless, as it currently stands).

Still, Russia's talk about secret weapons (a "hypersonic flying vehicle", no less) has got Optimuscrime positively giddy. It's just like Goldeneye! I'll bet Boris Grishenko is behind this somehow.

My favourite line from that movie, and among my favourite all-time movie lines?

[Thick Russian accent]: I am eeen-veee-ncible!
[Dies in flood of liquid nitrogen]


We're creatures of habit, we computer users. I was reminded of this fact a few times today. The first was while using an eMac at the McGill Daily office, crunching out a press release for the simulation. The machine was using Mac OS 9, which I hadn't used in years. I am only an occasional Mac user, but I can fly around in OS X. Knocked a few years back in the operating-system timeline, I found myself useless in performing even the simplest tasks.

So, too, with Windows: using Windows 95, I work far more slowly without the 'Show Desktop' button near my taskbar; same goes when I cannot minimize an active window by clicking it in the taskbar, or when I don't have my Blogger toolbar handy. This is the tragedy of ongoing change and increasing 'customization' in the operating system world: one can become increasingly efficient on their own machine, but the portability of computer skills decreases proportionately as customization increases.

And beyond efficiency, there's a sort of malaise when you notice something different in your digital landscape -- witness today's look and feel changes to Google Canada:

Creatures of habit, I tell you.