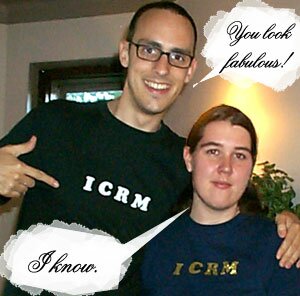 The management of the Illustrious Circle Road Manor, Optimuscrime (Co-Founder) and C-Mac (President and Chief Hanson Fan), celebrate the completion of C-Mac's master's degree with custom-created ICRM t-shirts. What better way to mark the end of an MA and beginning of a Ph.D programme than with blinged-out gold letters?

Sorry, suckas, but the ICRM haute-couture line is limited to ICRM residents and specially selected homeslices. However, we're making our very next fashion project available for purchase by the unwashed masses. Celebrate your love for the Skeeze with your very own Mrs. Federline wifebeater.

Related:
Stereogum: Mrs. Federline
Broken Language: "I want him on the cover of Details, rough-traded-out like Nick Lachey..." 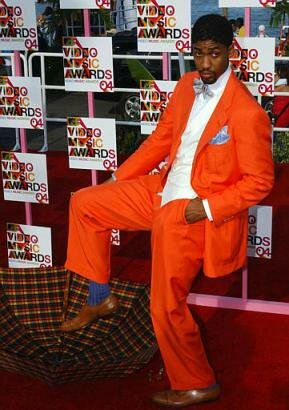 There's not really much that can be said about the MTV Video Music Awards that hasn't already been said in more painstaking detail and with greater wit than by Fluxblog. But here at Optimuscrime, we're all about flogging dead horses. And besides, what else are we going to talk about? Two hundred thousand demonstraters massing against Bush in NYC? Yaaaaaawn.

Above all else: Where the fuck were Brit Brit and Kev-Fed? WE WAS ROBBED!

But putting aside our natural disappointment with the no-go Spears-Federline nuptuals, the VMAs still weren't worth the three hours. The show appears to have been heavily focused-grouped by a pack of thirteen-year-old boys with severe attention deficit disorder. Skateboarding! Wayne Coyne in a bubble! Lil' Jon! Videogames!

A Tough-Wearing, Long-Lasting Hoodie Made Just For You, Tubby


Walmart didn't get to be the world's most powerful retail chain without knowing a thing or two about its clientele. From Walmart.com's description of a hooded sweatshirt in "Men's Big Sizes":

"Whether you're toning your abs or working around the house, this zip-up sweatshirt will keep you warm and soft. And it's stain-resistant, too. In case you take a break for some nachos."

Walmart's copywriting staff sure have it in for the portly gentleman. Just because you're buying a size 5XL sweatsuit from Walmart Online because you can't make it through the doorframe doesn't entitle them to rob you of your dignity.

Now, uh, somebody pass me those Tostitos, would ya?

We Can't Stop Going On / That's What I Pronounce


Germany is an unusual place. In my first year of undergrad, my roommate and I accidentally discovered Scooter, a chart-topping German band that cranks out an incomparably terrible brand of club trance that fuses aggressive industrial synth riffs with gabillion-BPM happy hardcore. By the end of my first year, we all had bars for our jackets reading Citius, Fortius -- Latin for 'Faster, Harder'.

Between their sound, their Oakley-sporting, bleach-blonde musclehead image, and the fact that their lyrics all seem to be in machine-translated English, they're almost like a living caricature of German pop music. Even The Big Lebowski's Autobahn aren't as funny as these guys.

My favourite Scooter song is 'Faster, Harder, Scooter' (ergo the jacket bar slogan), which starts with the frontman's bellowed demand to their crowd:

"Request! I want everybody as close to stage as soon as possible! Get that speed!"

Sure, it's terrible. But it's so terrible, so impossibly bad, and they're so damned enthusiastic and ... well, they're simply so bad that they become good again. You can't help but love an outfit that namedrops their own band name in the chorus. I mean, you don't see Xiu Xiu doing that shit. That's some serious promotional genius. Some next-level shit.

But, you're probably asking: Why my sudden recollection, six years later, of a short-lived Scooter fixation? Why do I again have 'Faster, Harder' inescapably skitting through my head? Probably because the staff at Double Pizza were blaring terrible club-trance music when I went to get a slice tonight. Thanks a lot, asshats.

Between This Wig Thing And The Fur Coats, The Line Between Rapper and Rupaul Is Progressively Blurring

Friend of Optimuscrime Matt Nish-Lapidus, who makes warm, glitchy electro-infused guitar rock, and just dropped a new album, Marathon Hideout, just got four shiny gold stars from Toronto's Eye Weekly. So, it's not just me pimping for my friends when I say that you must buy the album. Ten bucks, postage paid, gets you a copy. Sample track here (MP3); cop the record here. A Montreal show is in the works. Stay tuned.

And speaking of Montreal (what a natural transition between stories!), this city never stops amazing me. The dramatis personae for today's show on the metro included Sir-Perms-A-Lot, a twentysomething hip-hopper in a throwback jersey, with his hair in dark tight curled perm, topped with a fitted Yankees cap. His wingman, Homeboy Jesus, was a slightly dopey-looking white kid whose arms were decorated with finely-detailed portraits of Jesus Christ, and what appeared to be rhyming poems about the Messiah, possibly written by HJ himself.

These two were sustaining what appeared to be a several stop-long conversation with a thirtysomething Southeast Asian woman in a sedate blue suit. I can't fathom what started this conversation, but Perms-A-Lot was clearly sustaining it, and the businesswoman was politely but wearily enduring it. I couldn't hear all the details, but I did hear "... from Vietnam? Cool, I've got a buddy who's from Vietnam, he says it's pretty cool over there. Do you get back to Vietnam very often?"

So, it was something of an amusing scene to start with, but Perms turned that shit right up to 11 once things started getting hot in the Metro. The car was kind of warm, and Perms was all sweaty, so he wiped his brow, then returned to the conversation. Then, while Homeboy Jesus was chatting, Perms leaned back on the seat, pulled off the hat, took off his PERM WIG to reveal a bald head, wiped away the sweat, then replaced both perm and hat.

You heard it here first.