Random Post: You and You And That's The Only Way


Chumptastic brings us a hypothesis about the role of Kingston, Ontario in measuring the downward trajectory of fame:

Playing in Kingston acts as an indicator of famelessness.

Vince Neil is playing Kingston in late October. Vince Neil of Motley Crue. He's playing at the Iron Horse. I don't think there's been any sadder fall from glory since I saw Dee Snyder getting out of a sad-looking tour van to play the Embassy Hotel in London, Ontario.

Anyways, back to Kingston as celebrity rock bottom:

It's all got us worried: Will our Optimuscrime fans stick with us even as we move in January from our cosmopolitan headquarters in Montreal to the sticks of Kingston? You're loyal, right, pretties?

News flash: ICRM swarming with mangy rodents. Okay, maybe not swarming. And maybe not mangy. But we saw mice on two separate occasions over a week-and-a-half-long period. Gross! Our downstairs neighbours offered us the loan of their pride-and-joy country-farm-raised cat, a proficient mouser. We had to say no (sigh: allergies) but they are awesome for offering. Our landlord is having his contractor try to patch up potential entry-holes. We have left out traps. The bait is a tiny piece of a Kit-Kat bar. Optimuscrime would totally get our neck snapped for a Kit-Kat a quarter of the weight our body mass; we presume the mouse/mice will have similar utility functions.

May Heaven Abound With Rare Pressings 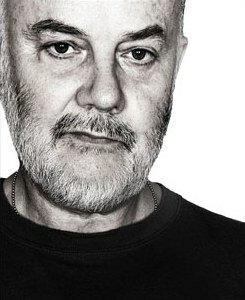 John Peel, legendary DJ and career-long champion of innovative and unsigned artists, is dead at 65.

Productshop doesn't pull any punches, but he's got it right. We lost one of our own today:

In other words, he was a fan.

He wanted the bands to remain his and his alone. Just like anyone who goes and sees a band before they're super big, you feel like you're invested in their success. When they make it big, you're already over them or upset they got too big. John Peel was a fan of music. He loved it. He lived for it."

Gosta, We Dig What You Say, But You Could Totally Cut A Couple Dozen Pages Out Of That Chapter 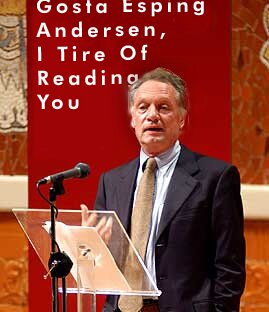 Oh, in case anyone is wondering: Grad school is a big pain in the ass.

That is all. Good day.

Sorry, PAX, You Lost Us At "Free From Inappropriate Sexual Content" 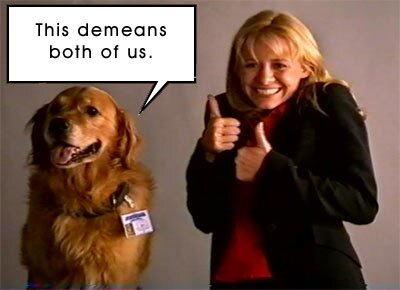 Joe Warmington, in the Toronto Sun, scans Hollywood for Republicans, and turns up one:

"Ever wonder if there is anybody from Hollywood in favour of George W. Bush? Scrawler found somebody. Really. Yes, Dave Johnson, the producer of the great show Sue Thomas: F.B.Eye, is actually in Bush's corner. So why aren't more from Hollywood in this camp? 'I know lots who are,' says Dave, laughing. 'They are just not advertising it.'"


Sue Thomas, F.B.Eye, for those unacquainted, follows the exploits of a hearing-impaired FBI lip-reader and her 'hearing dog'. It's produced by PAX TV in the US, a network that churns out maudlin family-values programming for middle America. Other must-see-TV from Pax includes a drama starring Billy Ray Cyrus, a show featuring models doing community service (the words "court ordered" spring to mind so quickly...) and a reality-TV series about quitting smoking.

We can't quite figure out what to shake our head at first: That Sun readers are trusting their entertainment reviews to someone who considers Sue Thomas, F.B.Eye "great", or that Warmington is surprised that a producer of ham-handed "faith-based family dramas" wants to see four more years of Bush's anti-obscenity agenda.

As for us, we like our television with a touch more nuance. For those who dig their philosophy dumbed-down and animated, we'd recommend The Simpsons And Philosophy, which discusses the 'moral world' of The Simpsons. The theists aren't left out, either: The Gospel According To The Simpsons considers the show's alternating affirmation and satirizing of religion.

So, we've covered off our Simpsons-watching. We're still waiting, though, on philosophical and theological justifications for watching Law And Order and late-night episodes of Newlyweds in syndication.