Oh, pretties, how we've ignored you. Our deepest apologies; there's apparently some sort of annual festival that somehow involves a fur-clad fat man breaking into homes to celebrate the birth of Christ. And this lil' holiday is a helluva time-eater, what with the meals and the family and the exchanging of gifts and whatnot.

Due to a lack of nerding-time over the break thus far, we fell somewhat off our advent-logging plans. The two songs that were never posted were the 21st (El Gato's Christmas In My City) and the 25th (Bruce Cockburn's Les Anges Dans Nos Campagnes,) in case y'all were planning to Collect Them All!

Christmas Eve was spent exchanging presents. Added to the Optimuscrime Clothing Roster: Pyjama pants, in a lightweight flannel, plaid-patterned and red. Leah would be proud. OCK nabbed an ObusForme massager, a hulking beast of a thing that is apparently intended to relieve muscle stress but could also easily turn bone into dust. We asked the salesman about it, and he offered a demonstration. Our shoulders are still bruised. Its modes of operation include 'pulverize', 'tenderize' and 'liquify'.

Christmas day was spent at Latvian church, singing all sorts of familar carols in a totally unfamiliar and consonant-rich baltic tongue: "Kluuuuusa nakts, sveta nakts..." After church, we repaired to the local Tim Horton's -- the only one open -- and waited for half an hour in line for coffee (after being rudely cut off by a hyperaggressive minivan driver in a santa hat).

Lather, rinse, repeat. Second verse, same as the first. On the 27th and 28th, we enjoyed our second Christmas Eve and Christmas Day of December, this time with our family in Oshawa. Christmas Eve was spent listening to Dylan Thomas reading his 'Child's Christmas in Wales' -- a tradition spanning three generations of Optimuscriminals. The next morning included danish kringle and present-opening. We will ask visitors to Chateau Bagot to kindly keep from drooling on our floor after seeing our fancy-assed new sheets. Stratospheric thread counts! Featherbed topper! If you need us, we'll be in bed.

And today, we went to another shopping mall (two mall-trips in a month; a new record!), where we observed the fascinating behaviour of the adolescent Oshawanian male in his natural habitat: In this case, sharing homemade softcore pornography from his camera phone with his fellow pack members. We are somewhat doubtful that the young lady in the starring role would have expected her oeuvre to be screened to an audience of pimply teens in the mall's food-court.

Upcoming: Toronto, here we come! Those of our readers interested in a New Year's Day breakfast at Sneaky Dee's, leave a comment. Guacamole Exquisito!

That Turtle Does Have A Posh Accent


Glad tidings, pretties: We are still alive, nonbloggery notwithstanding. Unfortunately, some holiday travel to the 'burbs of Toronto has kept us from posting our advent MP3s as planned.

So, here they are. Since we're blogging from our 'berry, we can't figure how to post links... So here, instead, are the URLs themselves:

Highlights thus far from Christmastravaganza 2005? Well, we began with a restful slumber punctuated only by the bored barks, lonely whines and dream-induced growls of Dabbit, the golden retriever belonging to OCK's brother. Waking up refreshed at 6:50am, we went on a few walks with the dogs, then booted over to shop among the sketchiest denizens of the Toronto 'burbs at Missisauga's Square One, where we happened to overhear the following brilliant conversation:

Girl: "What you putting mini eggs in there for? This is a basket for your parents. It's gotta be classy."

Guy: "What are you yelling for, mami? Everyone loves mini-eggs. Mini-eggs are classy."

Girl: "Mini Eggs are NOT classy. Turtles are classy."

With wishes for only the classiest of Christmas Eves,

We've been bested in the Advent MP3 game by Old Blue Bus, who've posted 'First Christmas' by Stan Rogers, a song one hundred percent guaranteed to make you all weepy. All we can offer is the world's most languidly-moving 'Little Drummer Boy', a humming slowcore drone stretched a good 90 seconds longer than the Bomboras' surf-guitar version we presented on December 9th. It's pretty, but it's no Stan Rogers. And Low knows it. Look at them (pictured above), all meek and mopey. Cheer up, kids.

Happy Christmas (Major Hostilities Are Over)


Okay, so the smoking-weed-in-a-Montreal-hotel-to-end-war campaign was a little sanctimonious. And yeah, Yoko broke up the Beatles. So those who aren't so sure about the post-Beatles Lennon but kind of liked his bittersweet peace anthem might like today's advent MP3: A cover of Happy Christmas (War Is Over) by 'the white D12', The Polyphonic Spree.

It's an appropriate little ditty for an era where G-Dubz is loosening the term "winning" so as to be so inclusive as to describe things like the US' position in Iraq, or, say, the St. Louis Blues.

It's A Genre-Melding Christmas! 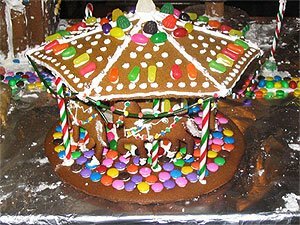 The gingerbread carousel was made by the housemates of our friend Ian Wong. And if it weren't already a masterpiece of holiday design, their website includes full Solid Edge design mockups for each of the pieces.

So, now solidly in the holiday spirit, we offer up a double-dose of Christmas music. Our frequent readers will have noticed that we missed a day yesterday (busy, we're afraid, doing some Christmas shopping).

The first song is a Christmas carol only in the loosest possible way. It's titled 'Christmas Eve', but is actually a remix of the Sugarcubes' 'Birthday', executed by Will and Jim Reid of the Jesus & Mary Chain. The track comes from a double-grooved remix record with two mixes ('Christmas Eve' and 'Christmas Day'.) The grooves each ran side by side along the surface of the disc, meaning that you would get a different song depending on where you placed the needle to begin. We unfortunately don't have a copy of this neat '88 rarity, but they can be had for roughly $22 for any Bjork nuts on your shopping list.

The second track is from Belle & Sebastian's Christmas Peel session, which is somewhat underwhelming (sounding like a talented but conventional carol singalong) but has a few interesting moments. This is one: A twee rethink of James Brown's funk anthem 'Santa Claus, Go Straight To The Ghetto'.