We Will Cut Your Right Eye Out, Then Your Left Eye, Then A Commercial Break 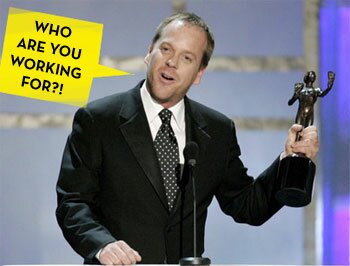 21:03
Bauer swears up and down that his upcoming anti-terrorist rampage "won't be about revenge." Nonetheless, we hope that Walt has his life insurance policy all paid up.

21:05
POTUS and Co. settle in for a little Traces of Death DVD screening. We're not sure what uncertainty there was about the unpleasantness of nerve gas, but this little video clears everything right up.

21:06
Finally, a character with a sensible phone not running on Windows Mobile. However, we note with satisfaction that Mike, like us, is still waiting for his carrier to offer the beautiful new 8700 series. Even the full power of the executive branch can't rustle up a CDMA-flavoured 8700.

21:08
Bauer is asked whether he plans to return to his loving family. He does not. Jack Bauer, Deadbeat Dad.

21:10
We reported last episode that the bad guys were running DOS. That is incorrect. They are, apparently, running Windows 95. They can steal a crate full of nerve gas, but they can't manage to get a bootleg copy of XP.

21:18
Jack returns to his usual vehicle of choice, a nine-seater SUV. Jack Bauer, protector of America, depleter of the ozone layer. Next episode: Jack can't use the commuter lane.

21:22
Whoa ho! Walt's trying to fake a WMD threat to bolster their geopolitical control and secure oil supplies? Thank goodness this show is entirely fictional and no such mad plot would actually occur in real life. Sidebar: There may be, contrary to earlier reports, some Democrats on the 24 writing staff.

21:25
Bauer claims that Mike cannot be involved in the plot, because he knows Mike. Bauer seems to have forgotten his copy of The People I Have Trusted Who Later Betrayed Me, Vols. I-III at home.

21:27
Always with the helicopters. Is there any situation that the Secret Service doesn't bust out a UH60 for? "The President needs a soda! Get the Black Hawk ready; we're heading to the 7-11!"

21:33
Mrs. Logan bemoans the poor prospects for psych-ward black tie events. But what about the Conduct-Disorder Cotillion? Or the Bipolar Ball?

21:35
Jack Bauer, constitutional scholar: "Well, Aaron, the situation here is something like a coup d'etat..."

21:40
Bauer gently inquires of Walt: "Where are the canisters?"

21:41
Bauer restates his request, outlining the potential adverse consequence of non-cooperation in terms of knife-point eyeball removal. It's quite a compelling argument.

21:43
Bauer promises to "just disappear again." Like, from the end of the season until the start of s6 in Winter 2007, say. Just long enough to grow a beard or a mullet and develop some sort of sketchy back-story and pick up a new civilian family to endanger.


Want to know how healthy your political party is? Take this convenient one-question quiz.

"I reminded myself of my vow upon leaving office, that having escaped the trap, I wouldn't go back for the cheese,"
-- Frank McKenna, confirming he won't seek the Liberal leadership

Innumeracy Is A Bitch 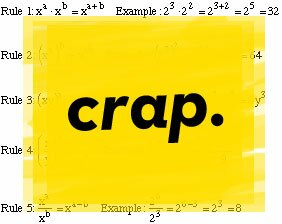 The GREs are a mean trick. Their quantitative section is just a set of repackaged algebra and geometry questions from grade ten math. And that's the worst part: When you flub the practice tests, as we appear to be doing, it puts not only a question-mark over future Ph.D. plans, but also draws into question whether we were ever qualified to be awarded an Ontario secondary school diploma.

Pray for us, pretties. As it stands, our education prospects are either the Draw This Pirate School of Art & Design or a degree-mill printout from Life Experiences U.

These Guys Have Clearly Never Seen A Lions Club Meeting

The National Post on Friday, just to underscore what a bunch of nutters Hamas are, posted excerpts from their 1988 Convenant, including this little gem about their 'zionist' enemies:

"With their money they formed secret societies, such as Freemasons, Rotary Clubs, the Lions and others in different parts of the world for the purpose of sabotaging societies and achieving Zionist interests. With their money they were able to control imperialistic countries and instigate them to colonize many countries in order to enable them to exploit their resources and spread corruption there."

We'd like to cling to the hope that involvement in the political process can bring some degree of moderation to Hamas -- a Sinnfeinization of sorts, if you'll allow us to totally invent words. But we're a little skeptical of the prospects of moderating a party who thinks that the Rotarians are plotting some sort of global politico-religious coup.