Hockey Will Never Be The Same

"A Canadian invention may make the gap-toothed smiles so closely associated with the sport of ice hockey a thing of the past.

According to a report in The Globe and Mail, researchers at the University of Alberta have come up with a device that has the ability to re-grow lost teeth -- a common casualty of professional ice hockey where players are not required to wear cages or visors."


Let's start out this way: We detest Reality TV in almost all of its forms. And we're sort of on the Senate's side in believing that the CBC ought to exit the business of competing in the open market for lowest-common-denominator programming.

But we got an email this morning from the good folks at Kingston's economic-dev office, KEDCO, with a description of a new project our national broadcaster is trying out:

"It's a TV version of a venture fair : entrepreneurs and inventors pitching for capital in front of a panel of investors. Only the investors are accomplished Canadian entrepreneurs: articulate, experienced, hopeful, but notoriously skeptical.

The "pitchers" are real Canadian innovators , looking for $50,000, $100,000 or more to fund development or expansion of their products or businesses. At a rehearsal I saw a few weeks ago, the products ranged from an incomprehensible computer service to high-end fashion to a Web 2.0 twist on the age-old jukebox.

The trick, by the way, is that these judges, the dragons, are committed to what they're doing. They have to put up their own money to be on the show, and if they deem a deal worth doing, they invest their own money."

Edit: The note from KEDCO was actually taken verbatim, and without any seeming attribution, from Rick Spence's blog, Canadian Entrepreneur.

Gagglescope also saw some of the pitches, including an antibacterial lotion dispensing unit for hospitals, an entrepreneurship program in Africa, a warning system for slowdowns in upcoming traffic, and a weird three-wheeled car that is better seen than described.

Sure, we're jaded about reality TV (especially after having our spirit ground into a fine dust by a forced hour of viewing 'How To Get The Guy'), but this sounds kinda cool. It's a terrific idea to have judges with a personal stake in their pick (versus, for instance, the doomed hopefuls of Canadian Idol, whose inevitable career spinouts don't lose Farley Flex a thin dime.)

Entrepreneurial types in Kingston can audition for the show by shilling for five minutes this Thursday at St. Lawrence College. Good luck, pretties!

Attention Dalton: A Government Is, Alas, Not An 'Entrepreneurial Organization'


A hilarious defence from Queen's Park on Trilliumgate.  Says McGuinty:

"I think that as an $80-billion organization that's trying to comwpete with the best in the world, it's really important that from time to time we refresh our outlook, our logo, how we present ourselves," he said. "It's just something that is done by every single proactive entrepreneurial organization and that's what we're trying to be."

Yuh-whaaa?  Dalton, you gotta realize:  Government does not need a refreshed outlook, logo and presentation.  Government is, however you feel about it, there for keeps, regardless of how little 'brand equity' they build.  Let entrepreneurs be entrepreneurs, let them worry about 'branding', and get back to the business of state.  Can't think of anything to spend your time on, McGintz?  You might start with energy...


Jack Layton: For finally getting rid of the baggy muscle shirts and buying a proper t-shirt, Pride thanks you. Your NDP members thank you. Canada thanks you. 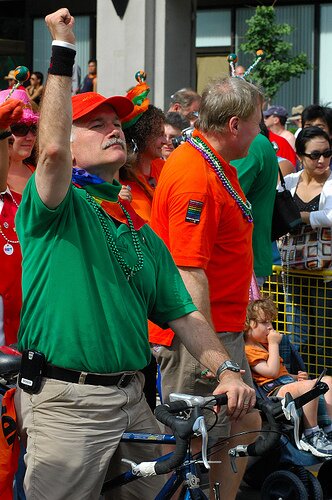 Fine, it's not perfect: Tucked in shirt, khakis, ugly belt, visibily-holstered Blackberry. But there's a lot happening here that's a vast improvement. The orange hat is cute, the wristband is great, and we're a big fan of the cowboy-style rainbow bandana. And, though it's not visible in this picture, you're riding a tandem bicycle with Olivia, and that's just so adorable it kind of hurts.

And before any of you go off on the negative (belt, pants, Blackberry), let us just remind you of Prides past: 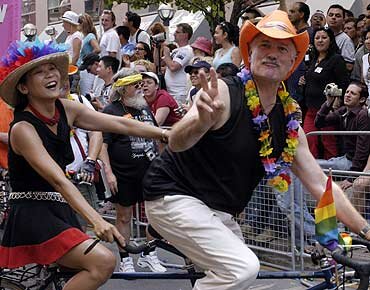 There was this getup, for instance: Even worse khakis, muscle shirt, floral lei and what looks like a Tilly-Stetson hybrid atom the dome.

And then there was this, which will remain indelibly etched on our poor psyche for the rest of our life, no matter how many therapy sessions we go through.

So, everyone, can we have a big round of applause for Uncle Jack, who receives this year's Pride Award for Most Improved Sartorial Performance?

It's Hot Out Here For A Pimp


Even the massive-fedora and bejewelled-cane crowd need to stay cool in the summer: 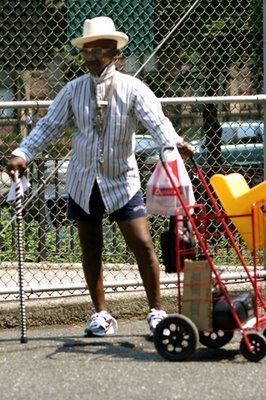